If you are in the market for a cheap Christmas party dress, the people at Goddiva have told me about their £15 dress offer. They sent me this dress to try and, I have to say, for a £15 dress, it's not at all bad. It's quite short, but that's not necessarily a bad thing, and even though the one I chose wasn't particularly partyish, there are lots that are.

Of the £15 options, I quite like this one for a party. Lots of ruffles but at that price, doesn't matter so much if you get a drink spilt over you.

And, bonus, free delivery on all orders at the moment.

---
Little Miss Rachel was sent a dress to review from Goddiva. If she didn't like it, she'd say so.

I am still here, it's just I got married and then got offered a job in Somerset.

I also tweet under the name @peacockfeather if you want to follow my more random day to day thoughts.

If you're looking for somewhere to go on a date, I could highly recommend the open air theatre. You can have a picnic, drink wine throughout the performance, snuggle under a blanket, watch a play about marriage {which was a funny coincidence as Much Ado About Nothing is about the week leading up to a marriage, and we get married next week} and there are fairy lights everywhere and the sun sets behind the trees behind the set. Beautiful. 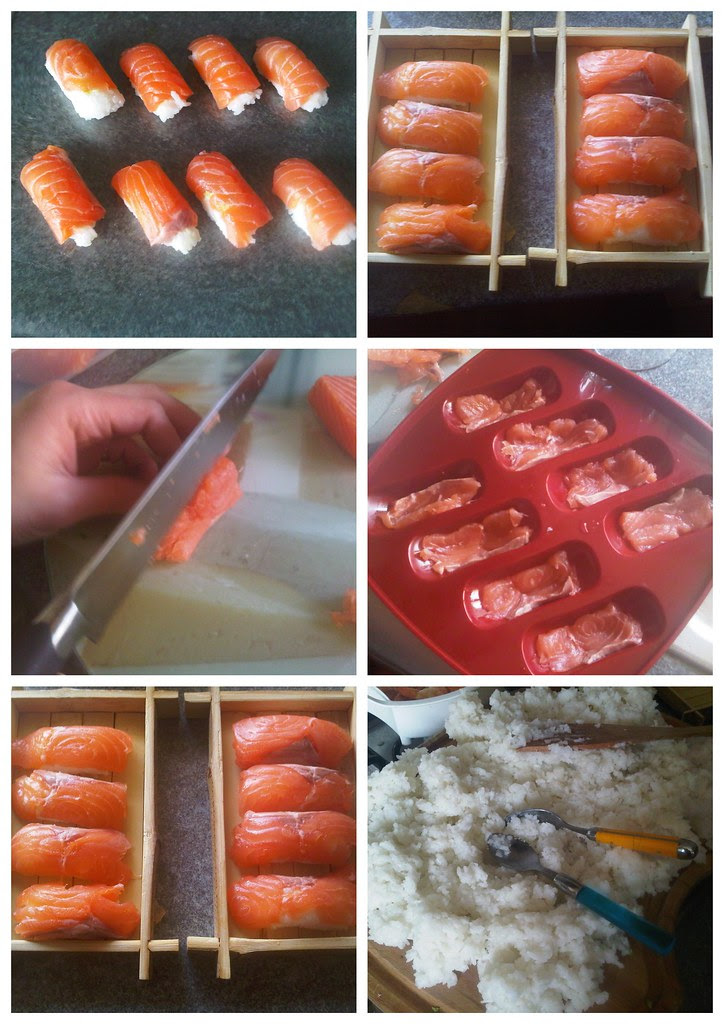 {All images from Author's personal collection}

My favourite Foods I 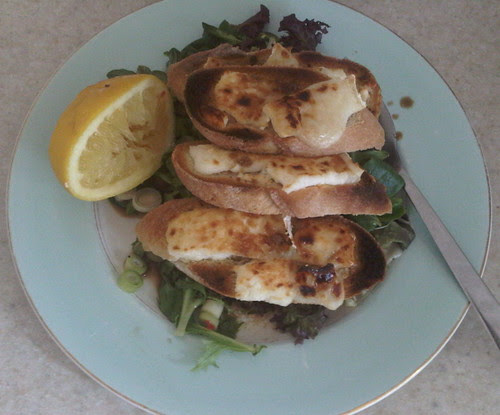 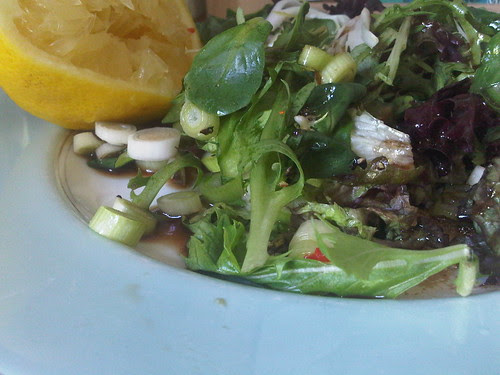 Goats Cheese Toast with honey & salad has to be one of my favourite foods. Melted goats cheese with a little brown sugar and honey; the crunch of the toast; the crispness of salad with a lemon, oil and balsamic vinegar dressing... this dish has all the right flavours and textures.

In fact, I like it so much that we ate it for supper last night with asparagus and then I had the leftovers for lunch today.
Posted by Rachel at 2:53 pm 1 comments

What's this? Two posts in one day?

Mark Frith is a bizarre guest {I was watching the Apprentice}. Granted, he was sat next to Ruby Wax but he spent the whole show telling Phillip what he was thinking. And seemed to rather miss the point. I know he used to edit Heat so I am aware that his usual audience is rather less intellectual than those that watch the Apprentice, but not that much, surely? He kept saying that Phillip was this, was that, whatever, when Phillip was clearly just distracted. And then asked why he didn't just admit that in the boardroom. I'm not sure Mark Frith has ever watched the show. He clearly isn't made for TV.

Went to a Rose tasting last night. Finally the perks of M's job have started to turn social. Anyway, we tasted 45 different roses and I tried to remember to spit not swallow. Each one might only be small but 45 x small equals more drunk than appropriate at even a social work event. At the end we spoke to the chap that organised it. I complimented him on the tasting. He agreed that the USP worked really well. I wasn't sure what he meant. Beyond the obvious that they were all roses, I hadn't noticed a USP. This morning, in the absence of a job, and with broadband mysteriously not working, I looked again at the invitation. It was the company with the largest rose list in the UK that organised the tasting. I presume that was the USP; didn't seem all that unique to me.

A TV producer friend identified the 7 ages of female drinking last week. With the exception of the Mum and Grannie phases I think I managed all of them over the bank holiday weekend. Oh, except the underage category I suppose {I have eye wrinkles now. I am clearly overage}. Yes, I drank beer in the park, supermarket-own label gin out of a paper cup at a student party, champagne, wine and mojitos at a European joint hen and stag party {much more tasteful than a UK version but a celebration all the same}, more beers and vodka and lemonade at home and of course the rose wines at the tasting. Rather a weekend...

Things which make me happy

1. clean sheets
2. afternoon tea with tea and scones and vintage china
3. laughing with friends over a dinner which goes on for hours
4. underwear shopping {or should that just be shopping in general}
5. talking in the bathroom with the almost-husband whilst getting ready for bed
6. the sun shining off the sea and the taste of salt when you lick your lips
7. drinking coffee and reading Vogue in a cafe
8. the smell of summer rain on hot pavements
9. play fighting with the almost-husband
10. hand written letters 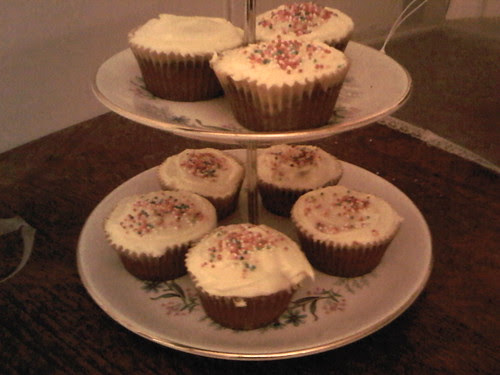 A £5 vintage 80s dress accessorised with topshop shoes, cardigan, seed bead necklace and lots of clutter in my sitting room.

An outfit for a European hen/stag party in which we ate tapas, drank mojitos and met all of the English guests attending their German wedding in July.
Posted by Rachel at 12:35 pm 7 comments

The sound track to my life has changed. Instead of hearing the regular ring of the phone, the click of the telephone exchange announcing the call, I hear a howl of a lonely dog, brief snatches of chatter as people walk up and down the road and the regular hum of aircraft passing overhead.

Next-doors cat slumbers on my knee, thrilled to have a warm lap to curl up on. I perch my laptop awkwardly next to me on the sofa. In this new life I have no desk, or at least, not one where I can use a computer as the internet connection is behind the TV.

My to-do-list, once noted in my work diary instead scans through my mind. Where once my clients squatted, they have now been evicted, replaced by shouts such as 'new job'; 'de-clutter'; 'washing'.

Where once I felt tired but full of life, I now feel restless, anxious, bereft. Everything has changed. And yet, the only thing that has is that I don't have a job. Nothing else. Odd, isn't it? You think it doesn't define you, but, on some level, I think it must.

...over the Easter Weekend. {I liked how Cate's post sounded, so I thought I do my own version}.

Do hope that you're enjoying the Easter weekend. My goodness, it is good to get out of the house. Much as I enjoyed my house-wife experience (aka sick leave) it's been nice to see something other than our flat and the garden. And talk to someone other than M, the postman or a passing friend.

M has been straight out on the golf course - what else could you expect - and I have been doing a spot of shopping since I managed to lose my ability to remember things when packing and realised I had left all my underwear at home.

Shropshire is green and wet. Makes a change from the grey and wet of London, although, in actual fact, the last two weeks have been surprisingly sunny. Got lots of washing done last week. Told you I was practising for impending unemployment.

See you next week! 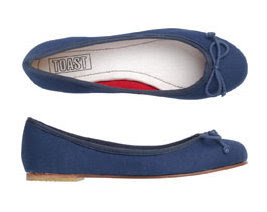 {Image by Toast}
My catalogue arrived yesterday. And then I went on a bus. Which went past the shop. So I got off. And came out with these.

Perfect for spring and summer and our honeymoon.

Less good for the purse. Especially since I am supposedly *off shopping*.

But everyone needs a new pair of shoes, once in a while.

{Image from Author's Personal Collection}
The Jenny Packham skirt. Rolled up at the waist to make it a little shorter. Rejected for this evening in favour of skinny jeans, converse and a t-shirt once I remembered that it may be a 30th birthday but the party is in Camden and vintage rose dry-clean only skirts do not mix with heavy music and rum and cokes at 2am.
Posted by Rachel at 2:51 pm 4 comments

The Best Job In the World

I wrote a few weeks ago about Holly (who is a close university friend of our very good friends B&C) being on the shortlist for the Best Job In The World.

Well, thank you to those who have voted for her.

In need of another party outfit...

Another weekend, another birthday. Another outfit required. A 30th this time, so perhaps a little dressier than jeans.

This is what I would wear if I had money to spend: 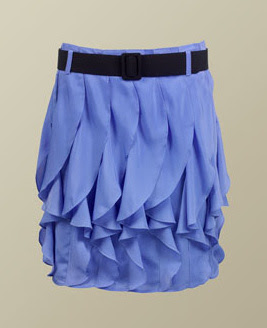 It actually reminds me of a vintage Jenny Packham skirt which I do own but is floor length and high waisted. Similar ruffles though. And pale coffee coloured, not blue. But maybe with a white t-shirt and brown ankle boots and a cardigan it might look ok. But where it is, I do not know. I shall have to try and dig it out.